A couple of months after Inspector Hobbes and the Bones was published, I spoke to Rona Laycock in The Writers Room on Corinium Radio (our local radio station). I give a couple of short readings from the book (which I don’t read as well as the excellent narrator of my audiobooks, Tim Campbell), along with a few comments on Hobbes’s origins. This interview took place before the Hobbes audiobooks were commissioned.
The interview lasts about 15 minutes.

Summary of the interview:

‘I was grateful for having been born human’ There’s going to be trouble. Andy Caplet’s wife goes away, someone is out to get him, and he loses nearly everything in a storm. Amazing both himself and his unhuman friend Inspector Hobbes, he heroically rescues flood victims and uncovers something shocking. Is Andy being set up for blackmail by the apparently charming young woman who attempts to seduce him, or is something even more sinister afoot? Hobbes certainly believes so, and he’s getting worried.

Listen to a sample: This is narrated by the award winning and brilliant Tim Campbell.
Inspector Hobbes and the Bones audiobook

Get your copy now

This was first posted to blogger.com, the original home of my blog, in 2018.

I’m very excited to report that audiobooks have been recorded for all the Unhuman Series, and that they are available on Amazon, Audible, iTunes, etc or from library audiobooks.

They are narrated by Tim Campbell (timcampbell.me) an award winning audiobook narrator, actor and opera singer. It is easy to see why he has won awards as he has a fantastic voice and I feel very lucky he agreed to read them. He has really brought the characters to life. So hopefully he will now be the voice of Hobbes that you hear when you read the books.

Get Inspector Hobbes and the Blood Audiobook

Get Inspector Hobbes and the Curse Audiobook

Get Inspector Hobbes and the Gold Diggers audiobook

Get Inspector Hobbes and the Bones audiobook

This was first posted to blogger.com, the original home of my blog, in November 2017. 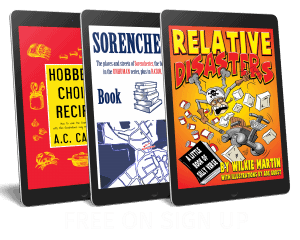